What Happened to the War Powers Act?.

Could be the answer. My vote and I am a liberal.

PROTECT IP / SOPA Breaks The Internet from Fight for the Future on Vimeo.

Woody Guthrie wrote “This Land is Our Land” in 1940 while living in New York. By the words “our land he was speaking to steelworkers and dockworkers, the “dust bowl” people who had lost their farms to bankers, the workers who risk their lives to build the Grand Coulee and workers who cut and stacked hay, “trying to make about a dollar a day.” His words help people to grasp their democratic strength and rebel against the structures of priviledge.

This land is our land only if we make it ours. Only if we confront the forces that continually make it their land exclusively. We must challenge their control of the political and economic decisions that rule us.

The essence of a democracy is self-government. As a people, if we want peace, racial freedom, privacy, clean air and water we must have the ability to control the decisions that affect those goals.

In 1776 Thomas Paine published his pamphlet “Common Sense”.  It was a call to end the monarchical rule of the British empire. He cut through the “haze of what was and saw what could be.”

As I look at American politics I strive to see the “root causes.” A nation is not a democracy simply because politicians, corporate leaders and the media says it is. We must think critically and ask ourselves if we will “settle” for a political system that is “pretty good” or if voters are holding their breaths and voting for the lesser of two evils. Thomas Paine reminds us, “A thing moderately good is not so good as it ought to be. Moderation in temper is always a virture; but moderation in principle is always a vice.” (Letter 1792)

A democracy should provide a context within which a peoples “instinct for freedom” can flourish.

“I would like to believe that people have an instinct for freedom, that they really want to control their own affairs. They don’t want to be pushed around, ordered, oppressed, etc, and they want a chance to do things that make sense, like constructive work in a way that they control, or maybe control with others. I don’t know any way to prove this. It’s really a hope about what human beings are like_ a hope that if social structures change sufficiently, those aspects of human nature will be realized.” [Noam Chomsky, Language and Politics]

The Media, The Internet and a whole lot of legal highs.

The Elusive Declaration of Peace

“Except for the occasional newsflash about sporadic violence—and the recent spate of stories about the sheer tonnage of materiel that the US is shipping stateside as it readies its departure—we don’t hear much about Iraq these days.” 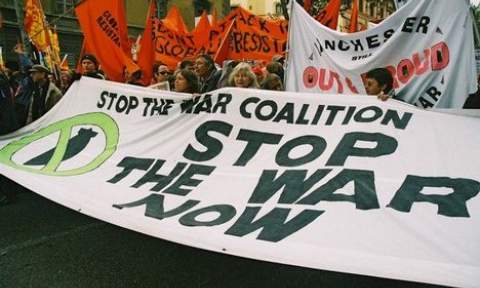 The re­main­ing US troops in Iraq are sched­uled to leave by the end of this month. While there had been some talk about ex­tend­ing the De­cem­ber 31, 2011 dead­line Pres­i­dent Obama set early in his term, this was scut­tled in Oc­to­ber when the Iraqi gov­ern­ment re­buffed the ad­min­is­tra­tion on two de­mands: that US troops be guar­an­teed im­mu­nity from pros­e­cu­tion and that the Pen­ta­gon be al­lowed to main­tain bases in the coun­try going for­ward.